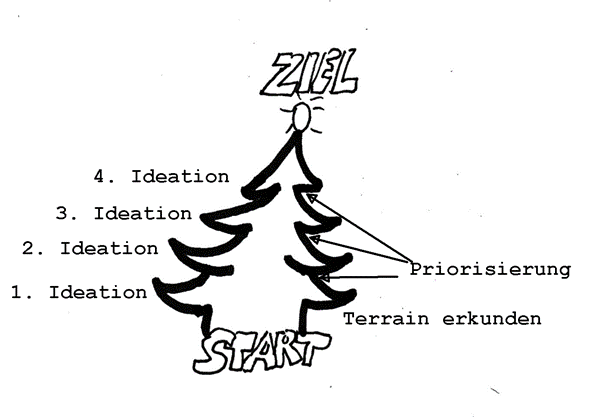 By Philipp Scherer20. July 2022No Comments

Online participation is time-shifted cooperation. This is one of its advantages: People do not have to find a common date when they submit and discuss proposals via a digital platform. However, there are tasks for which this mode alone is not sufficient and where iterations are necessary to develop some idea. This can be the case when collaborative dialogue is needed to find, select and concretise ideas – or simply when it is beneficial to sleep on interim results achieved. Iterations can also be useful when the individual team members are asked to think about their own ideas and make their own judgements, in order to perhaps revise their opinions in further steps, in the knowledge of the judgements of others. How can you organise such an iterative process without having to put time-consuming meetings on the agenda?

Here at CrowdInsights, we rely on the organised linking of short work units in the form of jointly created and edited documents and drawings, surveys, in combination with short video conference meetings.

A simple example is the search for a title or a name for a project. For this, we came up with a method for a client that could be called the christmas tree method. The geometric figure of a christmas tree describes the basic pattern of the procedure, which consists of a sequence of openings and closings and culminates in agreement on a concrete title proposal.

We started with a short video conference. The opening exercise aimed to explore the thematic terrain. For this purpose, we drew a metaphorical map with the workshop participants. Based on this, we developed initial title proposals in the manner of a silent post game. The initial suggestions that each person gave to the group were gradually changed and developed further by the others. The exercise ended with a first prioritisation.

The next steps were taken in the following days in silent work. Two to three participants at a time got together in groups. Their task was to add to the list of prioritised proposals. To do this, they were given the task of using certain patterns, such as finding titles with first letters from A-Z, titles with two words, or titles that consist of alliterations, i.e. words with the same first letter.

In step four, we went back to the breadth. Here we once again developed variants of the previous favourites.

In the end, the participants first chose their respective favourites within the variant groups and from the resulting finalist list finally their top five candidates, including the winning title.

Conclusion: The overall process gave the participants time to sleep on the proposals several times. By organising much of the process as a silent micro-team effort and in voting rounds via email and online tools, the need for time-consuming meetings was eliminated. By opening and closing the process step by step, it was possible to ensure that no proposals left the voting process unthinkingly.

Feel free to contact us if you have a task where we can help you organise a multi-stage discussion process with time-delayed collaboration!

Every two to three months you will receive our newsletter with short project reports, practical tips on participation and co-creation and news from academia.